The Kyverno CLI test command can be used to test if a policy is behaving as expected.

Please refer to the test command documentation for details. You can also find examples in the sample policies repo.

By using the Kyverno CLI, it is possible to test Kyverno policies in a Continuous Integration (CI) pipeline. There are two primary use cases for such CI integration.

The first use case is that Kubernetes resources, defined in YAML files, can be tested against a set of Kyverno policies to determine their result prior to being applied to a live cluster. This is useful when the policies against which resources should be tested are known yet the resources are not. For example, developer teams are responsible for creating their own manifests and pushing to a git repository from which they will be deployed to a running Kubernetes environment. Tests can be executed on, for example, a pull request by applying policies against the resources contained in the pull request and viewing the results. For validate rules, any failing tests may indicate that the resource would fail if it were allowed into the cluster. A failure in any tests would cause a failure in the overall pipeline, and by surfacing these failures early rather than later, users may make changes earlier in the delivery process.

The second use case is when ensuring a set of policies and resources always produce a predefined set of outcomes. This is useful when testing strategic modifications to either policies and/or resources, or when testing future versions of Kyverno prior to upgrading a cluster. For example, operations teams may want to ensure that a standard set of platform services are always allowed to be created in a cluster by defining a Kyverno test manifest which declares they should pass. Those services, represented in YAML manifest form, may be strategically changed when, for example, a new image version is available. By executing the same tests, expected results may be compared to actual results. If there are discrepancies, the tests fail and operations teams will know which test failed and can resolve the issue prior to changes made in a cluster.

GitHub Actions provides a comprehensive CI system for repositories hosted on GitHub. Tests for Kyverno policies may be executed via a workflow as part of the CI process.

The following is an example of a simple GitHub Actions workflow which may be used as part of building a larger CI pipeline. Consider a repository with the following structure.

The repository contains Kyverno policies stored in policies/, Kubernetes resource manifests stored in resources/ and complete Kyverno test cases stored in tests/. A sample workflow may be added at the path .github/workflows/kyverno.yaml with the below contents which performs the following for both opened pull requests and manually if triggered on the repository.

Upon pull request to the repository containing this file, the GitHub Actions workflow will be triggered. If all tests succeed, the output will show a success for all steps.

Each step may be expanded for complete output.

If a pull request fails in any of the steps in the job, for example if a new manifest is introduced into resources/ which fails one or more policies defined in policies/, the pipeline will halt causing the entire run to fail. 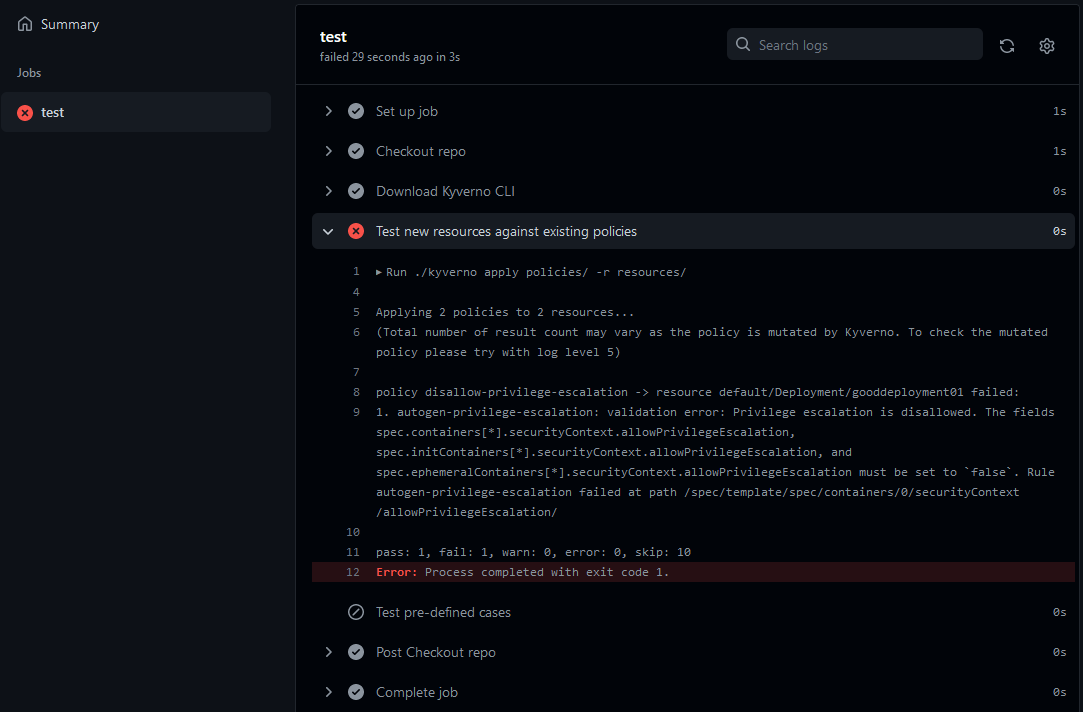 Again, each step may be inspected for output. In the above screenshot, a Deployment manifest did not pass a validate policy and therefore caused the overall failure.

For full usage details of the Kyverno CLI, refer to the documentation.